At BrokenHealthcare.org, we are trying to force price transparency by helping patients dispute and deny payment for confusing and error-filled medical bills and by advocating for legislative change on a larger scale. In these emails, we also endeavor to help patients be better healthcare consumers. But the rules for being a smart shopper vary depending on where you live. So in addition to using the tips we give you here, I urge you to become familiar with the healthcare billing laws in your state. Here is why and how:

Healthcare reform is a regular topic of discussion in state legislatures throughout the country. However, only a small fraction of states have actually put billing laws on the books. In those states—including Arizona, California, Connecticut, Florida, Illinois, and Oregon—lawmakers targeted so called “surprise billing”. Surprise billing generally occurs when an insured patient is treated at an “in-network” facility by an “out-of-network” provider. The result is a “surprise” bill received by the patient long after care has been provided, which will not be covered by insurance because of the out-of-network status of the provider. These bills can be financially crippling, and this is why a handful of states have addressed the issue.

Even though the laws are somewhat narrow in focus, or have been compromised in order to get passed, you should know where your state stands on the issue. The advocacy group Consumers Union has an interactive map that gives a broad overview of where each state stands. More useful, is a tool at the same location which provides state-specific links to resources for healthcare consumers. State protection is limited, but it is important to know where you stand. 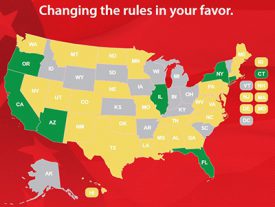 One important step we suggest is for patients to compare their medical bills with their medical records. But the procedure and costs involved in obtaining your medical records vary by state. You should know the prices and protocols in your state. You can almost always find this information on your state’s .gov site in the Department of Health or Department of Public Health section. It is a good idea to keep this handy.

At BrokenHealthcare.org, we believe that we can bring about broad-based healthcare reform. But we can’t do it without you. You can help by being a very well-informed consumer.