“We can’t get to the $4 trillion in savings that we need by just cutting the 12 percent of the budget that pays for things like medical research and education funding and food inspectors and the weather service. And we can’t just do it by making seniors pay more for Medicare.”
-Barack Obama

“The curious thing is Americans don’t mind individual mandates when they come in the form of payroll taxes to buy mandatory public insurance. In fact, that’s the system we call Social Security and Medicare, and both are so popular politicians dare not touch them.”
-Robert Reich

“I believe keeping our promises should be our highest priority and that means saving Social Security and Medicare while preserving the American dream for our children and grandchildren.”
-Tom Coburn

“We know that Medicare’s going broke in seven years, but we need to start over. That’s what the American people want us to do.”
-John McCain

Medicare Will Never Run Out of Money
Not long ago, I wrote about the fact that the U.S. Government’s own forecasts predict a time when the Medicare Trust Fund will be depleted, leading to either large increases in taxes, significant reductions in benefits, or both. Following that message, a friend wrote to me, “Dave, why are you being such an alarmist? We’ve been hearing about things like Social Security and Medicare running out of money since Reagan was President.”

And you know what…my friend is right. Actually, the alarm bells were ringing just a couple of years after Medicare became law. But the truth is that Medicare will never run out of money—you and
I will pay for it, one way or another.

I asked one of my interns to plot a different chart for me. He went all the way back to the earliest days of projections for the Medicare Trust Fund D-Day (depletion-day) and plotted the time remaining by year. Turns out, my friend was right, it has been an up and down kind of picture. I needed to understand why. As it turns out, a few of the same recurring things account for the variability:

Interestingly, back in the late 90s it seems that we cut too deep and reversed the pressure on prices by deciding to pay physicians more. That should be a present-day warning to us. The system is capable of resisting government pressure on prices. That, in turn, should remind us that the only true system capable of driving down prices is market forces, not government proclamations.

Looking at this year’s projections, we see a steady decline in the balance of the Trust Fund, which comes at a time of:

The projection is for the Medicare Trust Fund’s depletion-day is just 8 years away. 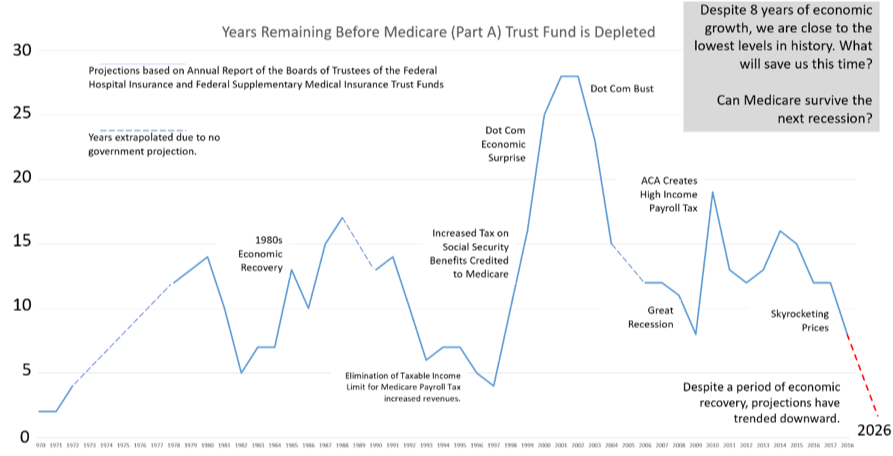 Now, like I said in the title, Medicare will never actually run out of money—because it never really had any to begin with. The Medicare Trust Fund is merely an accounting concept. One way or another, the Federal Government will fund Medicare, though it will take an Act of Congress to do so. That Act can only do one of a few things:

That’s it. Those are the three choices. We’ve already seen that the Federal Government is not capable of actually driving prices down, though I’m sure we will continue to hear that it is. If you think there’s partisanship and stagnation in Washington right now, just wait until decisions have to be made about how to keep Medicare benefits flowing. If Democrats are in power, you can bet that we’ll see big increases in taxes and, very likely, some version of universal healthcare (ObamaCare on steroids). And if Republicans are in power, you can bet we’ll see big cuts to benefits, and likely a lot of borrowing (while Republicans claim to be fiscally conservative, that really only means that they don’t want to raise taxes. They seem to have no problem borrowing money when they are in power).

Or, we can do something about it. We can force transparent pricing that creates competition and allows the marketplace to drive down prices. These are the choices. There are no others. The time has come to act. Please join us.

“We need real leadership, Democrat, Republican and independent to stand up and say, we have to live within our means.”
-Tom Coburn

“The largest party in America, by the way, is neither the Democrats nor the Republicans. It’s the party of non-voters.”
-Robert Reich